The art world is above about the current exhibition on view at the CORE Club New York: iconic American artist Judy Rifka. A legendary member of the Lower East Side arts scene in New York City, Rifka has worked across painting and video, and this current exhibition, Ionic Ironic: Myths from the 80’s, is curated by LatchKey Gallery and features at the CORE Club now through March 29, 2019. 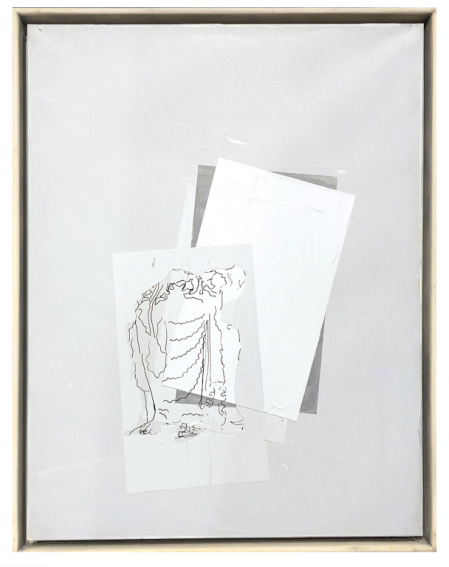 A seasoned artist whose earlier work featured in the memorable 1980 Times Square Show, two Whitney Museum Biennials (1975, 1983), and Documenta 7, Rifka’s approach mounts a fearless examination of everything from painting to new media, figuration to geometric abstraction. Featured in publications ranging from Artforum to the New York Times, Rifka’s work has recently received renewed attention from the art world. For Ionic Ironic: Myths from the 80’s, the artist displays works that haven’t been on view to the public since a 1988 exhibit at Brooke Alexander Gallery. Rifka’s knowledge of art history is on display in these eclectic, graphic works. Pastiched, remixed motifs ranging from classical antiquity to mid-century minimalism appear through Rifka’s History of Sculpture series – including these works on view at CORE Club.

Rifka exudes a keen grasp of line in her carefully constructed compositions. Negative space flanks sparse, emphatic, painterly lines delineating the figure. This creates a dissonance: figures feel lost from themselves, flanking the canvas but demarcated yet hidden simultaneously. Vaguely reminiscent of established graphic works such as the Matisse Cut-Outs, Rifka’s energetic lines and muted tones combine to exuberant effect in these thoroughly contemporary-feeling artworks.

Hierarchies dissolve across the picture plane in Ionic Ironic: Myths from the 80’s, with shapes colliding and ricocheting across the canvas. Iconographies dissolve into mythic status with recurring motifs and shapes juxtaposing against flat swaths of color in methods recalling De Stijl legend Piet Mondrian’s Broadway Boogie. Rhythm and line jostle for the viewer’s attention, creating a complex yet ultimately rewarding composition. Rifka’s works seduce, beguiling visitors over time – multiple viewings continue to reward the viewer with something previously undiscovered. Somehow both complex yet reassuringly straightforward, works by Judy Rifka evade easy categorization. 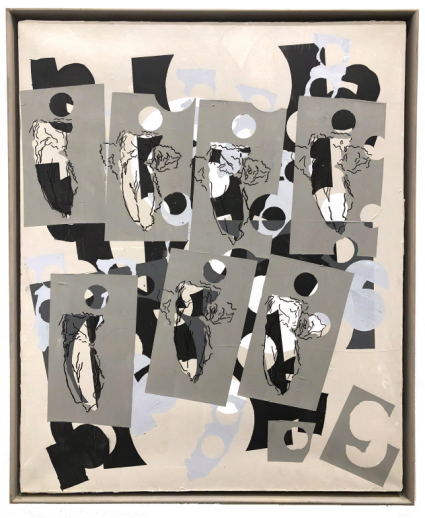 A contemporary of art world luminaries such as Jean-Michel Basquiat, Rifka remains ahead of her time in her keen, insightful approach to artmaking. Unafraid of juxtaposition and provocation, the artist continues to innovate as she continues working in a multi-disciplinary style in her artistic practice. Most recently treated to a retrospective of her long-spanning practice at the Jean-Paul Najar Foundation in Dubai, Rifka continues to mount more visible exhibitions of her work. The art world continues to delight in rediscovering her work, as her dedication to probing the boundaries of possibility across figure and line result in artwork so fresh and vibrant that it seems to belong to the future.

For more information on the exhibition, visit here. Ionic Ironic: Myths from the 80’s is open to the public by request: please contact info@latchkeygallery.com.