Skip to content
ANTE Mag is focusing on ten projects that span creative disciplines and seek to build wider community ties between creative disciplines in our new series of interviews,10xCommunity. Featuring artistic projects, community-building initiatives and interdisciplinary platforms, ANTE is sharing these interviews on the mag and across social media that spotlight these endeavors through the current social crisis to pivot to sharing positivity and uplifting creative news to our audience. Waves and Archives founded by Manan Ter-Grigoryan, Marianna Kosheleva and Julian Jimarez-Howard in 2018, endorses fashion as an art form across academic, instutional and art world settings. For our very first 10xCommunity interview we sat down to learn more on the Waves & Archives leadership team’s perspectives on fashion as a radical artistic platform.

ANTE: Thanks for chatting! Let’s start with your beginning – was there a specific catalyst that brought Waves and Archives into being? What was your initial vision for how Waves and Archives could change the landscape for fashion-related projects and their presence in the greater art world?

W&A: As it often happens with projects such as this, many stars had to align for things to start coming together in a concrete form of an exhibition and a certain plan for the future of Waves and Archives. For me, Manan Ter-Grigoryan, the motivation for this project was a certain reluctance I faced in graduate school from faculty members who were tacitly implying fashion was not art, and therefore I could not write my thesis on then still alive Alexander McQueen. Things became increasingly concrete when several years ago I got a call from a friend and colleague Julian Jimarez Howard wanting to start a publication that would focus on fashion as a medium of art. But it wasn’t until Marianna Kosheleva joined our trifecta with her strategy and vision that we all got the push we needed to move our project forward. So to answer your question, I think more than any occurrences, PEOPLE are catalysts. The vision for Waves and Archives has always been to promote fashion as a medium of art, and the need to do so in all domains simultaneously with a library, a publication and a gallery seemed like the most organic response.

ANTE: Can you walk us through your “manifesto” present on your website? How do you envision this Statement of Rights as charting a new course for the relationship between the overlap of Fashion and the Art World?

W&A: For as long as I can remember, I felt that fashion was not only one of art’s media, but that it was a medium most challenging- in terms of curation, complex- in terms of analysis, and profound- in terms of conceptual underpinnings. As fashion started to enter art museums, without the platform of a gallery and without any academic and institutional backing within the art-world proper, it became prescient to create a space for one of the richest forms of artistic production, to flourish without the imposing limitations of its own industry. The manifesto which comes in a form of a statement of rights is there to highlight the injustices and reaffirm the goals. As things change, so will the manifesto, so its date becomes a part of its own archive.

ANTE: Talk to us about Sinead O’Dwyer’s “In Myself”: you note that O’Dwyer’s work”retain(s) a distinctively grounded relationship to the reality of experiences and forms of the persons whose bodies they originally emulate.” Can you elaborate on why O’Dwyer’s works became your first exhibition as an entity?

W&A: Sinéad deals with the question of body politics in a way that not many fashion artists have dealt with before. As fashion has largely responded to this question by blindly promoting arbitrary inclusiveness, and in the process only re-establishing binary dichotomies, such as normal/ alternative, Sinéad does not use the “norm” as a departure point to suggest “the alternative”. She uses each body as its own departure point, thus over and over – whether it be with her silicone pieces or the woven ones – establishing the original body as the authoritative subject. I think this is a very important statement to make in a world where the fashion industry drives women into body dysmorphia, and on a larger scale – archetypes drive people to mental illness.

ANTE: In addition to the Gallery exhibitions, your online presence incorporates an Atlas and a Journal: can you explain how these materials are crucial to the W&A mission?

W&A: As mentioned earlier, it was important for us to suggest a drastic change in the space that fashion is given in institutional, academic or art-world settings, and it was important for us to make that change as organic as possible. It is not simply about giving fashion artists gallery representation, or creating a gallery that has fashion as its focus, but also about creating a space where academic thought on fashion can freely coalesce without having to be confined to either art or fashion publications, and about providing access to the type of knowledge that is made available to many artists working in traditionally accepted art media to artists working in fashion by creating a library. The Atlas is a knowledge visualization map that gives access to the way Western academia studies art criticism to anyone who might be interested to learn. I have spent 3 years researching connections between 150 thinkers who have produced knowledge most central to art (in all its adjacent disciplines: anthropology, sociology, cultural studies, visual studies, philosophy, psychoanalysis, political studies, etc.) mapping five categories of relationships between those thinkers, and mapping those relationships in a visual atlas. This project that we call Waves and Archives Atlas maps out 12,551 connections, thus sharing a visual key to art criticism as it is today. It is important for us that when we do represent fashion artists, it is not in a vacuum. 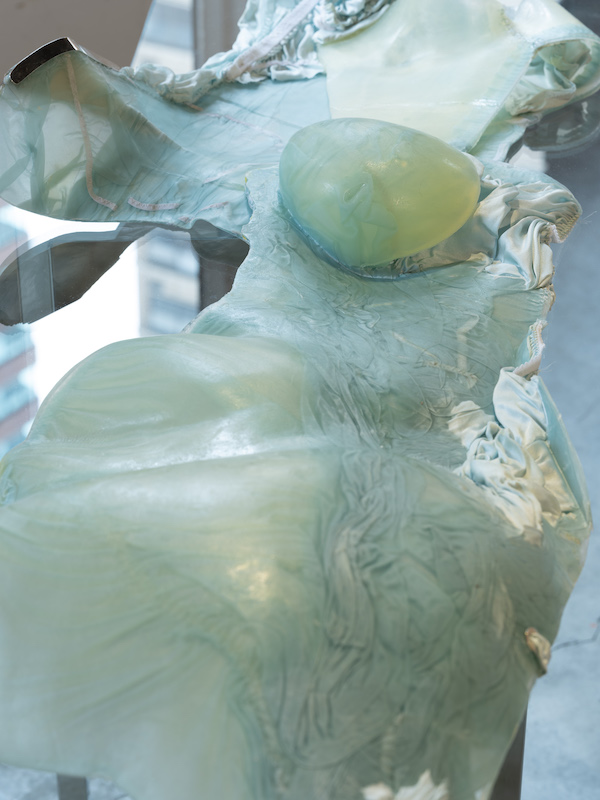 ANTE: Art Theory and Semantics are Woven into the mission of W&A as your Instagram and website link to critics such as Adorno and Derrida: what was missing in the art theory/art critical landscape with regards to Fashion’s role in the greater field and how does Waves and Archives fill that role?

W&A: In reality nothing is missing, except assignment. What I mean is that the knowledge that we apply to the study of any form of art is not necessarily produced with that application in mind. Adorno did not write directly about art, Foucault did not write about art and frankly neither did Derrida. We, as art academics, have applied that knowledge to art criticism because art does not exist in a vacuum. Similarly, we ask that the same knowledge is applied to the study of fashion as a medium of art, leveling the playing field of intellectual rigor. To give an example without calling out names, a famous art publication described the MET “Heavenly Bodies” exhibition with the words: “Will make you feel all godly…” – the kind of vocabulary clearly inadmissible in their coverage of any other art exhibitions.

ANTE: How do each of your founding member’s backgrounds inform the mission of W&A?

W&A: Growing up in six countries, in a constant state of embracing and adapting to new cultures while my cultural references kept being re-contextualized, dress and visual culture in general, allowed me (Manan Ter-Grigoryan) to recognize patterns and find my footing before I could gain fluency in languages. I am very academically inclined, and Waves and Archives is my dream and life’s mission, so I am making an effort to ground it in reality.

Marianna Kosheleva who has graduate degrees in Rocket Science and Press Relations, has a healthy distance from the subject of our endeavor, while maintaining a strong passion for the complexity of its realization. I think it is this knack for realizing complex multi-faceted projects that drives Marianna within this project.

Julian Jimarez Howard is a bright gallerist, writer, and a contemporary art curator, with an amazing grasp of a perspective that is not purely Western-centric, a rare understanding of textiles, and a visionary outlook on fashion’s prowess as an art form. He is an awesome partner who can talk to you about Derrida while installing a drywall.

ANTE: Talk us through your recent initiatives and where W&A is headed in the near future?

W&A: Our most recent initiative was the launch of our gallery Waves and Archives with an ambitious solo show of works by Sinéad O’Dwyer. In signing a contract with us, she became the first ever fashion artist to be represented by an art gallery dedicated to showing fashion artists exclusively. We are hoping that our next show (a group show of both emerging and established fashion artists) coincides with the launch of our Waves and Archives journal. Let this serve as a call for papers 🙂 In the meantime, we continue working on the design of our Atlas – the knowledge visualization map and its interactivity.