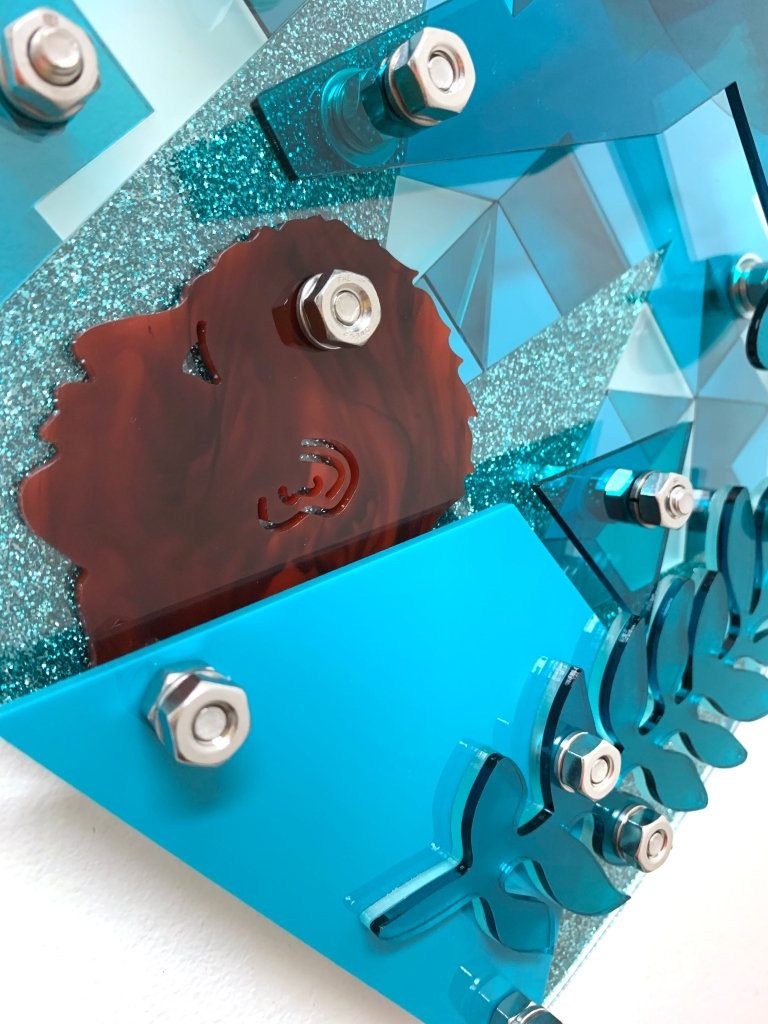 Davis’ works embrace a keen grasp of formal composition, embedding careful details into meticulously cut plexiglas shapes attached using metal fasteners. These industrial materials allude to the lexicon of labor intrinsically tied into entrenched views of African-American history, outmoded means of regarding black Americans still haunting our contemporary society. Davis draws from a pared-down color palette and specific, enduring iconography intrinsic to both the Black and Southern vernaculars – images that question where these two identities overlap, as well as their points of divergence. Davis himself speaks of discrete images – separate and distinct – that define his installations, drawing each element into conversation with an overarching whole, yet making distinct boundaries palpable for these works on view at UNTITLED – and later the Weeksville site.

LatchKey Gallery presents this new series by Damien Davis which visually investigates the murder of a minimum of three hundred black residents of Greenwood, Oklahoma in the early 1920s. As we near the hundredth anniversary of this massacre, COLLAPSE: Black Wall Street Study seeks to create new means of entering into a dialogue on the progress that has (or has not) been made with regards to civil rights, representation, visibility, and reparations for descendants of former slaves. Davis does not shy away from the tough conversations, yet invites others to respond authentically and inquisitively to his work. The artist will host an on-site activation of his work every day during the UNTITLED show hours at 4 pm exactly, while the artist will be in conversation with curators Natalya Mills and Larry Ossei-Mensah on Dec 6 at 2 pm.

Damien Davis is a Brooklyn-based artist. Born in Crowley, LA and raised in Phoenix, AZ, Davis centers his practice in historical representations of blackness by unpacking the visual language of various cultures. The artist investigates how these societies code and decode representations of race through craft, design and digital modes of production. Davis has shown at The Whitney Museum of American Art, Museum of Modern Art, Museum of Arts and Design, and Sugar Hill Children’s Museum of Art and Storytelling among others. He has also presented solo exhibitions in Philadelphia and Seattle, as well as Reading Pennsylvania and Richmond, Virginia, and his work has been included in group exhibitions across the US as well as in Hiroshima, Japan and Florence, Italy.