October 3-6 marks the inaugural edition of Satellite Art Show in Brooklyn, and along with that comes the most significant collection of live & recorded performance art ever presented by Performance is Alive.

ANTE. Mag is proud to serve as Media Sponsor for this groundbreaking performance art presentation by Performance is Alive – a survey of the most exciting emerging and mid-career performance/new media artists with an intersectional lens, representing a diverse group of bodies and identities. Don’t miss the full roster of Performance is Alive-curated programming, with two especially notable events occurring Friday, October 4th at 8 pm when notable artist Barbara Rosenthal discusses her work in tandem with a screening of “News to Fit the Family” and Saturday, October 5th at noon for “Queer Form: A Panel Discussion” centered around queer body politics in new media and performance – for full list of events, follow the Performance is Alive Schedule on their Facebook page and also available HERE. 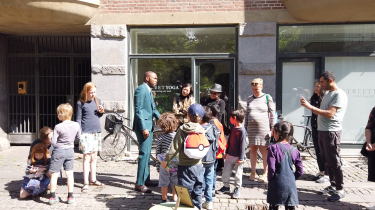 ABOUT PERFORMANCE IS ALIVE
Based in Brooklyn, NYC, Performance Is Alive is an online platform featuring the work and words of current performance art practitioners. Through interviews, artist features, sponsorship and curatorial projects, we aim to support the performance community while offering an access point to the performance curious. Performance is Alive at SATELLITE ART SHOW is curated by Quinn Dukes (Founder + Director). | performanceisalive.com

ANTE. Mag is dedicated to bringing under-the-radar contemporary artists to a wider audience. To this end, ANTE.’s Editorial team specifically focuses on highlighting works by intersectional artists and cultural producers to our readership. If you believe you are working on a project that fits this description and deserves wider recognition, please email our editor: audra@antemag.com